Common eye condition in people over 50

WHAT IS VITREOUS DETACHMENT?

Most of the eye’s interior is filled with vitreous, a gel-like substance that helps the eye maintain a round shape. It’s attached to the retina by fine fibers. As we age, vitreous slowly shrinks and these fine fibers pull on the retinal surface. When the fibers break, the vitreous separates from the retina. This is vitreous detachment.

HOW SERIOUS IS VITREOUS DETACHMENT? 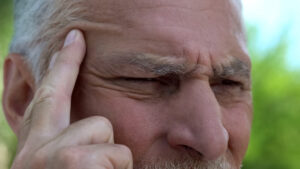 WHAT ARE THE SYMPTOMS FOR PVD?

As the vitreous shrinks, little “cobwebs,” increased floaters or flashes of light are common.

HOW CAN PVD CAUSE VISION IMPAIRMENT?

Although a vitreous detachment does not threaten sight, once in a while some of the vitreous fibers pull so hard on the retina that they create a macular hole or lead to a retinal detachment. Both of these conditions are sight threatening and should be treated immediately.

HOW IS PVD DETECTED?

The only way to diagnose the cause of the problem is by a comprehensive dilated eye examination. If the vitreous detachment has led to a macular hole or detached retina, early treatment can help prevent loss of vision. Call 321-727-2020 to schedule a dilated eye exam, especially if you’ve recently had a sudden increase in floaters and flashes.

WHAT IS THE FIRST STEP?

What is the first step?

Regular eye exams are the best way to detect such conditions early and address them before they develop into more serious problems. To schedule an eye exam or a free consultation for cornea surgery, call 321-727-2020.

A Proactive Approach to Safeguarding your Eyesight.

Our main office 502 East New Haven ave in downtown Melbourne is temporarily closed due to renovations. Our other four locations and ambulatory surgery center are open. Saturday appointments are at our 509 east new haven office in downtown Melbourne. If you have an appointment at this location our staff will contact you to reschedule you as soon as possible.

We apologize for the inconvenience!